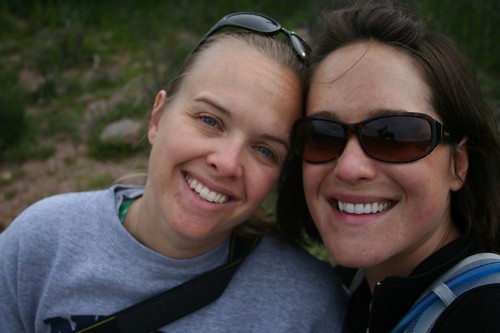 Happiness on one of several hikes I took this weekend (with Panda and Shay); you’ve got to absorb every second of this fabulous Spring weather while you have it in Arizona. The desert is so green from our wet winter and it seems the entire Valley is outside this weekend, watching Spring-training games, golfing, walking, breathing in the warm, sunny happiness of glorious pre-summer weather.

Have you heard of The Happiness Project (THP)? It’s no secret around here that I’m all for self-help, having a regular “to do” list and resolutions galore. In fact, I just ordered this book, even after the conservative-Christian backlash. (I’m agreeing with very little they say these days.) 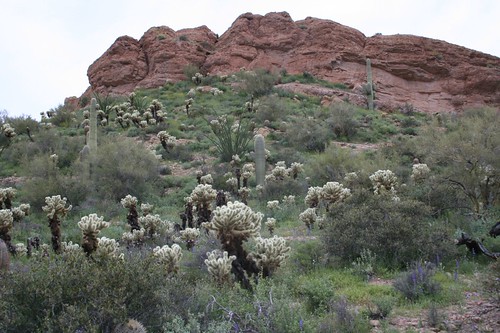 So, my version of THP:
Role models: My father, Paul Farmer, JPM, Ruth
Mission: Do good, be good, smile often.
Motto: Be the Light
Symbol: A Saguaro with Her Arms Outstretched
Patron Saint: Ruth, one of the original tough, smart women 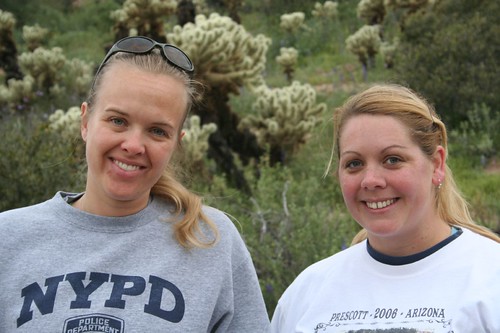 What is your motto? What makes you happy? Today my list includes Fresh & Easy Markets, beautiful weather, new espadrilles, seeing The Other Boleyn Girl yesterday after having read the book and being able to laugh at the wild differences, dinner plans with friends, bowling well last night even though that damn Salty beat me by one pin, and having time to craft and cook. 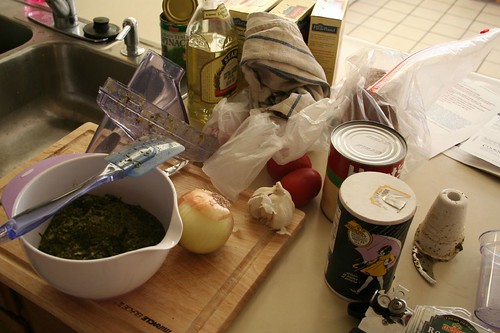 The journey of a community dinner.

Have you heard about that silly battle going on between Jerry Seinfeld’s wife and the other lady over their similar cookbooks? Heads up ladies — you can’t patent a recipe. Their idea of “hiding” vegetables in other foods to increase the nutritional value isn’t anything new around my house. My mom has been putting vegetable purees in foods for years and we all know that lovely Weight Watchers apple sauce trick when baking. 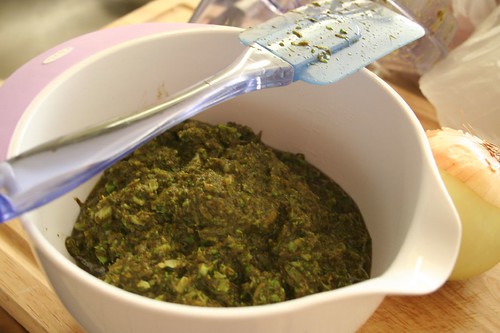 Or how about a little broccoli and spinach hidden in your penne meat sauce?

Last night’s community dinner celebrated my neighbor John’s 24th birthday. (Yep, he’s a wee.) Alma made a lovely orange and chocolate cheesecake that was nearly too pretty to eat, although everyone managed. 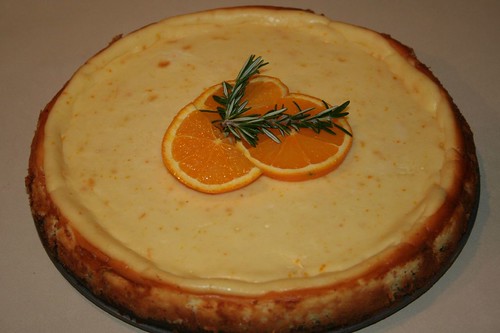 It had a chocolate crust and orange zest in the filling. It was out of this world!

I gave John a giant box of wine as a gag gift. He once mentioned that since he was from northern California, he could never drink wine from a box. It was against his constitution. I wanted to take off my flip flop and hit him over the head to knock that snobbiness right out of him. No one in my house is too good for boxed wine, or for free food. So, we collectively laughed ourselves silly last night when he tore into his gift and got a bit of humility handed to him in the process. Ha!
This is a snob-free zone. 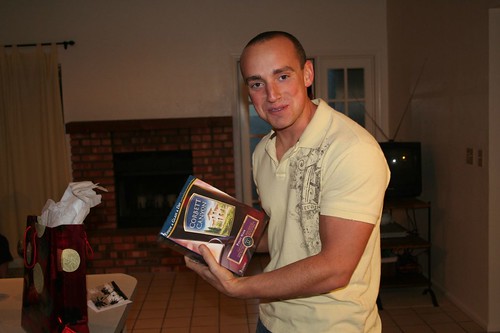 John’s favorite food is Italian; I made meat sauce from the latest Cooks Illustrated, whole wheat penne pasta and salad. Shayla brought a wonderful garlic green bean dish and many friends brought wine in a bottle to soothe a certain ego or two. I also made another loaf of that no-knead bread and this time added more beer — the result was amazing. This is the best loaf so far. Hooray for beer! 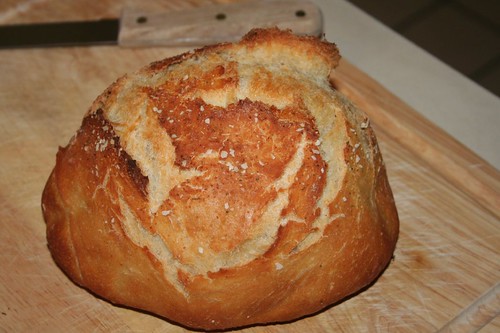 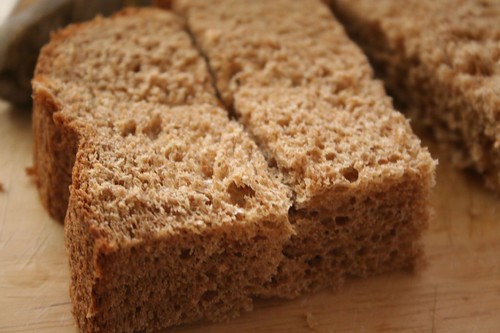 Bread, one of the sauce’s secret ingredients. 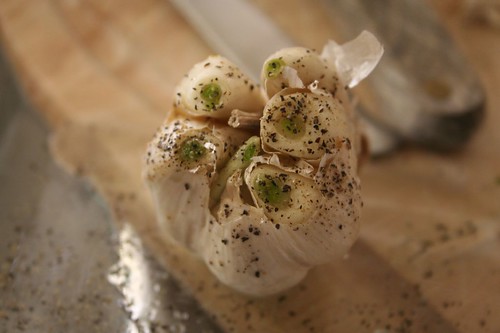 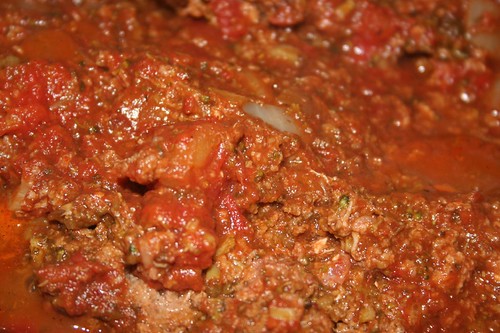 See? You can’t even see the green. Bwahaha!

The pasta sauce called for mushrooms, which I forgot to buy. Instead I substituted a can of drained spinach and a pound of broccoli, which I stuck in the food processor with the meat, bread and other ingredients. Deceptively delicious indeed. It was a sneaky way of adding a lot of vegetables to the meal, which also stretched out the sauce. Good thing too because we had 11 people there last night and I wanted left overs for lunch today. Too bad I couldn’t bring in a little boxed wine too. 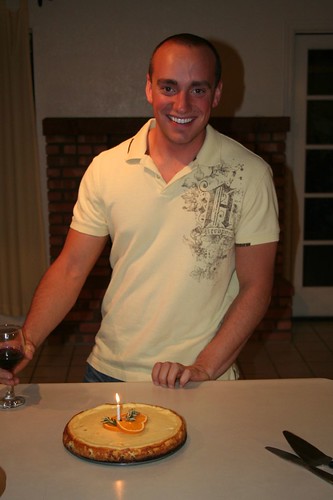 P.S. I worry about my brother, who lives in Denver, a lot. Like it could be my second job. I figure karmically, the nicer I am to my neighbors, the nicer people will be to my bro. I welcome newbies from other states to community dinner and some how the universe will turn this into a great meal for my brother with new friends. Or so I hope.

We are one step closer today to having Madame President, who would be sworn in by our Madame Speaker of the House and holy moly I can barely contain the feminist in me from doing cartwheels around the office. Yahoo! 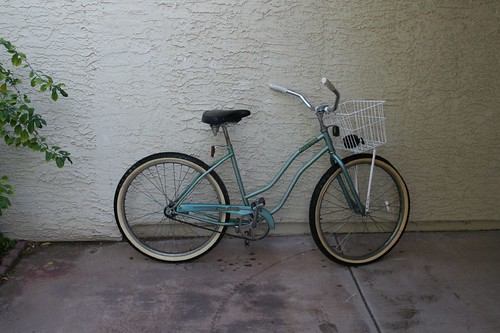 To celebrate Spring, the changing of the political tides, puppies, fresh flowers and all the other nonsense that makes me giddy on an 80 degree day in Phoenix, I pulled out my cruiser bike for a ride. The tires were long since flat, so I cleaned up Esmeralda {She’s green, and there is a theme here. Her perkier cousin Ruby wasn’t too pleased I was cheating on her with the older, more established model. Then again, Esme has never not once dumped my ass in traffic. I still have scars from my last crash with Ruby. Just goes to show you there is often something comforting to the wider, softer, sweeter model.} 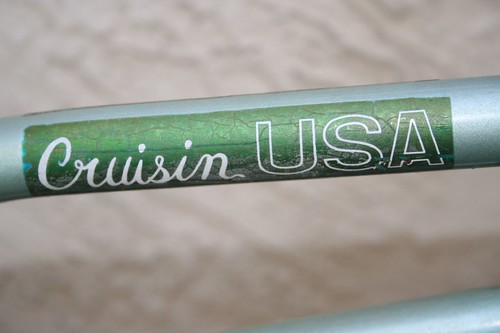 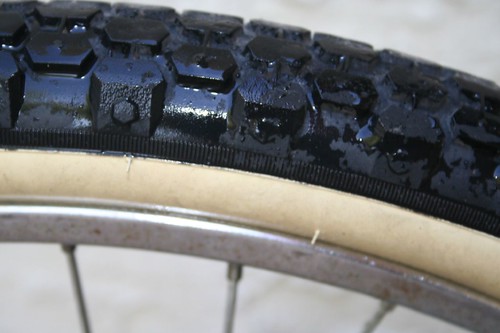 Esme needed new tires ($25) and to be hauled to the bike shop in my trunk. She’ll be picked up and ready to go by tomorrow, when I plan to ride her all over Tempe to get my groceries and errands accomplished. Exercise, enjoying the beautiful weather and not a bit of carbon wasted in the process. Ah, life is good. January 20, 2009 cannot get here fast enough. 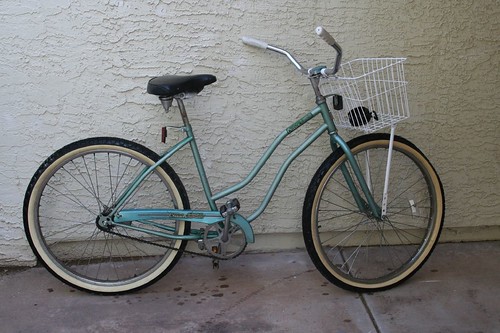 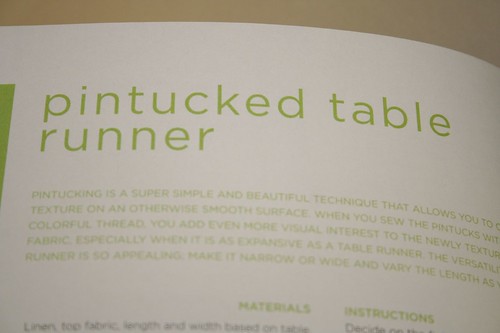 Dear Finny,
I decided on the table runner. Maybe it was the pretty greens in the photo that reminded me of the day we celebrate my people (St. Patrick’s) or maybe it was the simplicity of the linen that drew my eye. I like it! 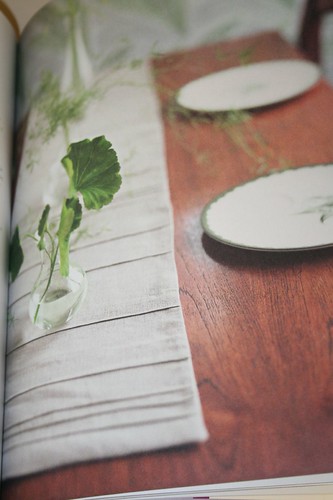 So, sewers — here is your challenge: the pintucked table runner for March for Finny and Donk’s Sew Along Challenge. The twist is to not only follow the pattern but to do something you’ve never done before. For example, quilt, stamp or embroider your fabric. Use a fabric you’ve never tried before. Do some hand sewing just for the heck of it. 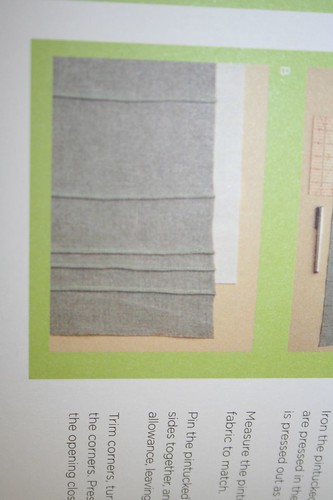 Whatever you decide, please drop a photo off in the sewing pool before March 31st so we can pick a winner. Show us where you are displaying the runner and describe what you’ve learned!
Because March is a green month, I’m considering recycling material for this project. That’s the only hint I’ll give. How about you Fin?

Sewing Slacker, reporting for duty. I must confess — I haven’t been sewing much lately. I am pretty sure my copy of Simple Gifts to Stitch has a nice layer of dust and I have no idea what I’ll select for the next project.
Don’t you love having me as your partner in this little sew along?
The fundraiser went well. My mom is flying home to Texas today. I’m getting my personal life back in order now that I’m not working insane hours. So, tonight! I will post the project. Promise.
In the meantime, how awesome are these entries to the January/February challenge?

Thank you for selecting such a deserving winner for the scarf project. That scarf is beautiful and I’m rather fond of Lynn. Too bad it is already 80 degrees in Phoenix. My window of scarf-wearing weather has been slammed shut and the air conditioning is coming on soon.

Hope you and that fabulous garden are doing well!
xoxo,
Donk

The fundraiser is tonight I’m at the brink of a mental breakdown. My stress-levels are through the roof and I woke up this morning with my body so cramped and cranky, my shoulders were up by my ears. Enter my mom, who takes me to a fabulous breakfast, and a massage. Afterward, already feeling more at ease, I suggested we take a quick drive to check in on a few of my friends. 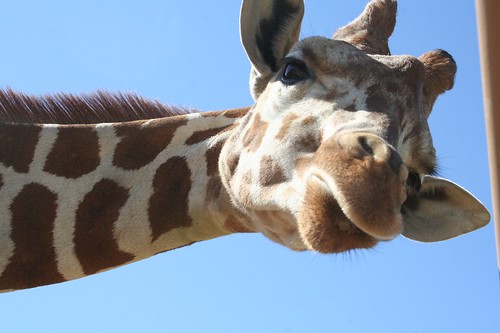 Seriously, how can you be stressed looking at that kind of beauty? Those eyelashes, the graceful long legs, the sweet gilted walk. She had me at hello. 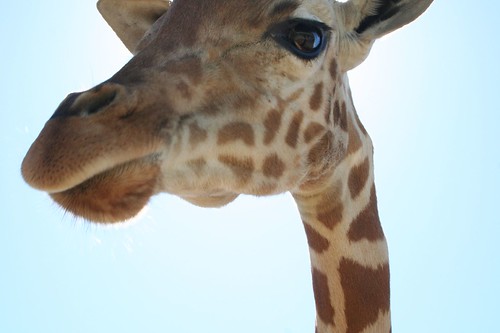 My mom was quickly hooked too. She grabbed some nearby weeds and we began feeding our African friends, who I’ve named Sand and Sable. 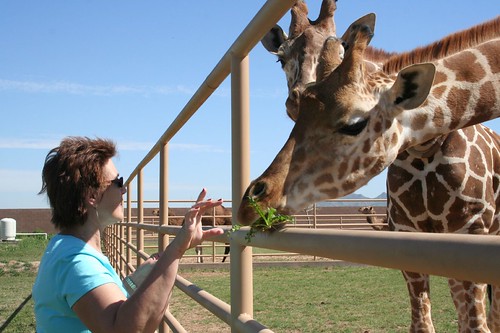 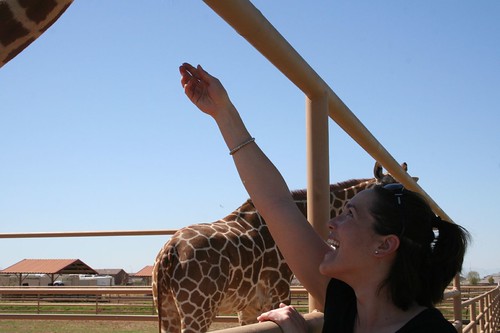 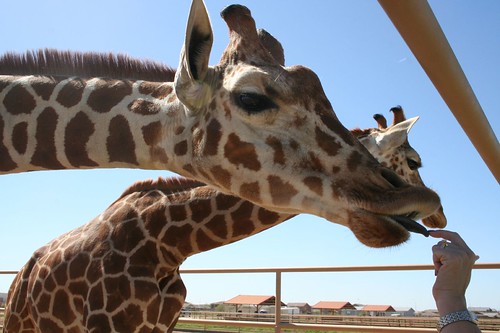 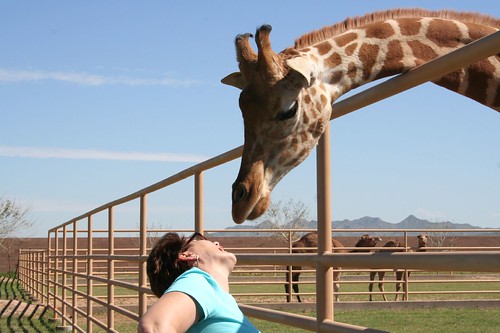 This is where she is lecturing them that the next time she comes to Arizona, she wants to see some “baby girrafos.” Giraffos because my mom tries to speak Spanish around me and can’t, knowing full well this sort of attempt makes me hold my sides I laugh so hard. And babies because this woman is desperate for grandchildren and she’s more than likely going to get them sooner from a source other than her two children. I walked away with my hands over my ears saying, “Same speech, different giraffo.” 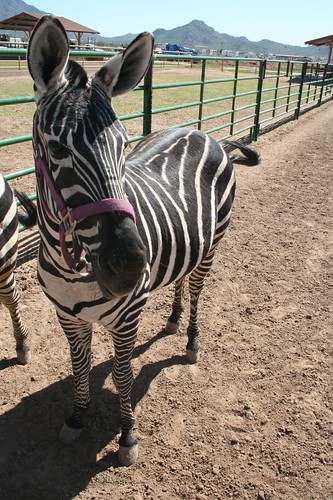 While we were in the neighborhood… 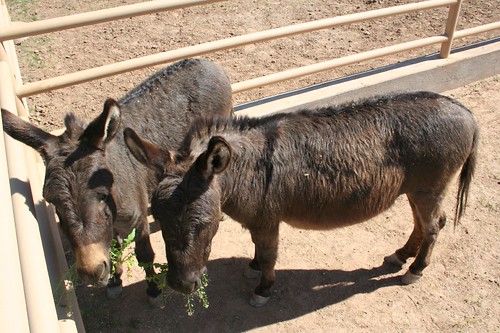 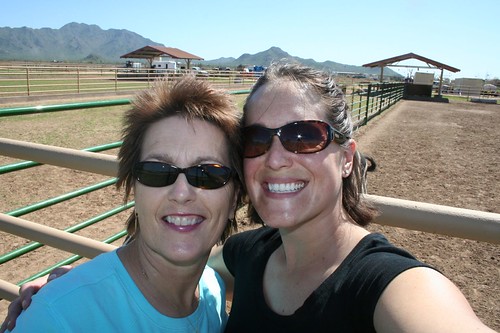 Indeed, I am much less stressed now. I just needed a suburban safari. And a big glass of shiraz with lunch.