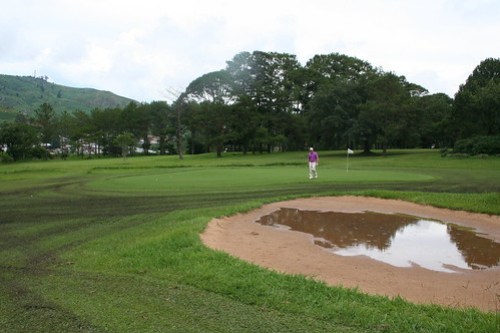 I recently listened to Amy Poehler’s audio book, Yes, Please! As a huge fan, this didn’t disappoint. There was one section that keeps bouncing around my brain, months later: a director once asked her to confess her vulnerabilities, regrets, sorrows. The director wanted to know her biggest mistakes so they could be likely taken advantage of. Or maybe the director just wanted to flex the muscle of power and see how much information he could get.

While it may have been a temporary career setback, she told the director no. Absolutely not, no. She counseled listeners that anytime someone wants to exploit what makes your heart hurt, even for a quick laugh — or perhaps for a quick laugh — say no.

I’ve gone back and forth on whether to talk about the golfer in this memoir, namely because our story isn’t funny. It doesn’t softly poke at me and my clumsiness. Instead it smacks of heartache and disappointment. But to write about dating and to not include him would be like trying making a cake without the flour. Our relationship was pivotal. (Divotal?)

Here is what you need to know: we dated for about three years. He was a professional golfer on the small stage when we met, and on a much larger one when we broke up. During that time, we got to travel to some beautiful places — Ireland, the Bahamas, Hawaii, etc. We shared life milestones — weddings, births and deaths in our families. We walked through three fundamental years of our 20s together, holding hands and trying to do our best to manage conflicting schedules.

Life had him in Europe most of one year, and on the road most of the next. We’d go up to six weeks without seeing each other, but checking in as much as possible. While he was working furiously to create a career as a professional athlete, I was finishing my graduate degree and managing international health projects in a handful of countries. There were times we were on the same time zone on different continents.

It is likely if we had spent all of those three years in the same location, our relationship would have ended far sooner. I have nothing bad to say about this man. He was kind and generous and he loved me the best he could. He also was honest that his career was his first priority.

When someone says you will never be the priority — listen.

I didn’t want to listen. I was convinced this he was the one. So, I dug in and traveled as much as I could to be by his side. My insecurities flared. The little bit of time I spent with golfer wives and girlfriends was much like that ridiculous reality show, WAGS. Wives were at the top of the heap. Girlfriends were barely noticed. Mistresses and groupies abhorred. At thew few PGA events I attended, there were swarms of women who sadly decided their best chance at a good life was having a baby with a golfer.

Even in the best circumstance, being married to a top golfer is a tough life. Yes, financially you are set. But there is no off season for golf. Those 140 men are constantly fighting to keep their cards. So, you raise a family by yourself, watching your husband travel the world on television. And you never stop worrying about those swarms of (younger, perkier, more carefree) women who want any piece of your husband they can get.

One Christmas I came home from Mozambique to immediately fly to the Pacific Northwest to celebrate the holidays. It happened to be the same time of year he’d made it to the big leagues, and everyone wanted to celebrate. I couldn’t get my head on straight. There I was standing at dinner party after dinner party holding glasses of champagne toasting a man I loved, when a week prior I’d been holding abandoned toddlers at an orphanage. The juxtaposition left me a mess.

All that considered, when he called things off a few weeks before Christmas the following year, when the presents were already wrapped and under the tree, I was shocked. I thought we were headed toward marriage. It was a dark time that eventually led to a much healthier, happier place.

Somewhere on the back nine, crammed into designer jeans and halter tops, I’d forgotten who I was and what was important to me. Soon, Sundays meant time for church and family. I learned to cook and bake. I pulled out my dusty sewing machine and knitting needles. With less travel, I planted a garden I could tend. I finished my first novel and started the second.

It took a few more years of making questionable dating choices to return to a place of love, but I’m finally there — thankful he could see what I could not.