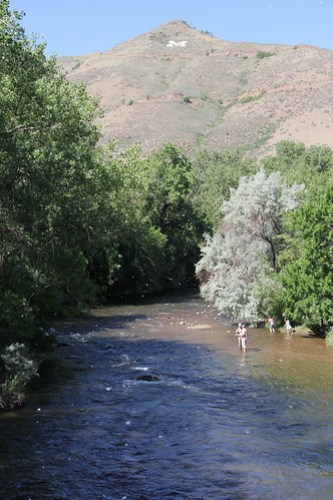 When living in Colorado, I met a man through mutual friends. He was a bit younger, good looking, and from a great family. We would run into each other socially for a few months before he asked me out. We went for a dinner at a fancy spot downtown, got ice cream afterward and walked around, enjoying the last warmth of an Indian summer.

He was painfully shy.

We saw each other off and on for the next two years. What I’d soon learn was he had a long-time off-and-on girlfriend. She wanted to get married and he felt too pressured. They’d break up, he’d ask me out, and I’d foolishly get my hopes up again not yet knowing about the girlfriend. Then he would soon fall back into the shadows, incommunicado.

Our best date was fly fishing. Ridiculously early one summer morning before the sun was up, we met downtown to drive north of Fort Collins to a national park. I’d borrowed my brother’s fishing gear, including waders that were enormously too big. We spent the day walking the ice cold river and fishing. The wind through the trees, the sunlight bouncing off the water, the walls of the canyon — it was a picturesque day.

Of course, those waders and my utter lack of coordination would get me in trouble. I fell more times than I could count, the icy water rushing in the top of the bib. Eventually, with my shins and knees throbbing, I found a large rock in the center of the river and rested, watching the clouds come and go.

After I’d moved home to Arizona, he reached out. He wanted to know if he could share something with me, and if I wouldn’t judge him. Curiosity won, and I agreed too quickly. Soon, a spreadsheet arrived via email. It was a list of women along one axis and categories along the other. Categories such as “job, family, good in bed.”

Before your imagination jumps, I was not on the list. But there they were — a dozen women (who I didn’t know), ranked.

He wanted to know what I thought of the list and whether this made him a bad person. What I’d come to learn was he was debating proposing to the girlfriend. What I’d guess he was contemplating was if he’d sown all of his wild seeds. He said he confided in me because he knew I went to church. (As if church prepared me for this bullshit?)

I told him it didn’t make him a bad person, mental lists are likely common — although to write it down and attach a numeric value was gauche. Rankings. It struck me as immature and unkind. (I was also wondering how he had enough time to juggle a dozen women and a live-in.)

He’d be married sooner than later, which he informed me of the day after via text. Remind me to include in my vows one day, “Thou shall not text other women tomorrow.”

While I’ve never caught anything fly fishing, some fish you throw back.

One Reply to “Chapter 8: Ranked”