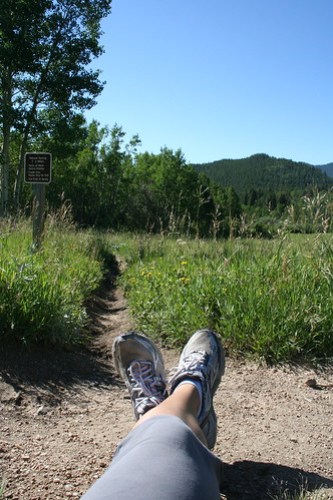 We went on a long, overnight hike this weekend in the Superstitions. As we were marching along, in hour 3 or 4, I was thinking of the various times I’d gone into nature to find solace. Once, when trying to decide whether I wanted to stay in a relationship or not, I hiked several hours to a meadow nestled in the Rocky Mountain foothills between Golden and Evergreen. It was a special place I’d found the summer before, and I knew the exertion, thin air and silence would give me plenty of time to sort out my heart.

I’d been dating J for nearly a year. We’d met online and unexpectedly hit it off in person. He wasn’t who I typically date. He was more than ten years older, heavy set, atheist and had a young child. He was also kind, funny, smart and enjoyed taking me to sushi on the weekends. It worked, until it didn’t.

We were sitting in a crowded pizza restaurant at the bar for lunch one Sunday afternoon. I’d just ordered a glass of champagne. The restaurant was new and so full of people, there was a cacophony of forks and knives hitting plates, layered behind laughter and clinking glasses. We were likely discussing his ex-wife when he looked at me and said, perhaps without thinking, “There is no way I am going to get married again, or have more children.”

I let out a gasp, and tears sprung from my eyes. I too was so surprised by my reaction, I cried harder. I remember wiping furiously at my face with the cloth napkin and trying to drink my bubbly before storming out. The restaurant’s soundtrack had stopped, or perhaps that is just how the memory sits. Everyone was staring at the woman at the bar.

Always a bridesmaid, never a bride.

In truth, I didn’t want to marry J. We weren’t in love and I couldn’t for the life of me get him to exercise. We couldn’t hike together or do any of the fun outdoorsy things I love. It wasn’t going to work, for this and many, many other reasons.. But to hear that the opportunity was closed made me angry, irrationally.

I did finish the champagne and storm out. The next day I hiked to my meadow and sat thinking of what to do. Breakups are the worst, even when they should happen. Watching Nelson galavant through the tall grass, chasing woodland creatures, I prayed for a sign.

God, just tell me what to do. He is sweet to me…

After a few minutes of silence, I decided it was time to hike back. I stood up, and having shifted on the rock where I’d been sitting, I rammed my head into a large pine tree branch above me that I hadn’t seen. I hit my head so hard, I bled.

We broke up, and he was not happy.  He later called and suggested we should get married. He’d “be okay with it.” When his telephonic half-assed proposal wasn’t successful, he was even less happy.

Today, we remain friends and he is still a sweet, kind man. There is another chapter I could write on my poor timing in dating men; soon after our breakup, J went on to sell his tech company for gazillions. He didn’t have two extra pennies to rub together when we dated. (Sushi on credit is a thing.) He now sends the occasional text saying hello from Tokyo, London and Amsterdam.

Sometimes when you ask for a sign, you get one.