I’ve been dreaming of buying a new bike. I gave Esme away because the fit wasn’t right and after spending weeks of my life on Ruby, I wasn’t willing to ride with a cramped bike. Riding Ruby to work isn’t practical for a dozen reasons, namely clipping in, leaving her downstairs in the bike rack and having to ride her on the street. Sweet Moses, you wouldn’t believe how many people I know who have been hit by cars lately, including one man in front of my running group this week. A car pulled right in front of him and we watched him hit the pavement. Phoenix must be the worst city for cyclists. 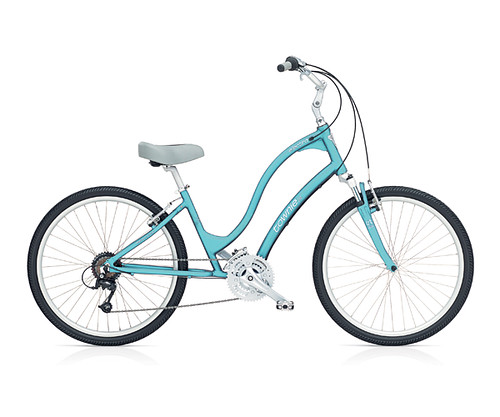 So, I haven’t been wishing for just any bike, but a dreamy, pretty, comfortable, stylish ride. Isn’t she glorious? I could ride her on the sidewalk when there isn’t a bike lane and wouldn’t worry as much about losing this investment vs. her older, much more demanding high maintenance sister. She’s also one pricey mama. At $500 after taxes, the basket and lock, it is the equivalent of 12.5 weeks not filling up my car with gas. The inherent frugal monster in me is screaming, “Are you crazy? Go to Target and get yourself a $100 beach cruiser and suck it up.” The realist in me is standing in the corner coolly whispering, “If you don’t love this bike, you aren’t going to ride it. So why bother with some cheap Target bike?” The environmentalist is hugging a tree chanting, “DO IT. You drive less than 15 miles a day. A bike would be a great way to make your carbon emission zero. And the weather is only going to get cooler. Do it!”

27 Replies to “Just Call Me Carmen”