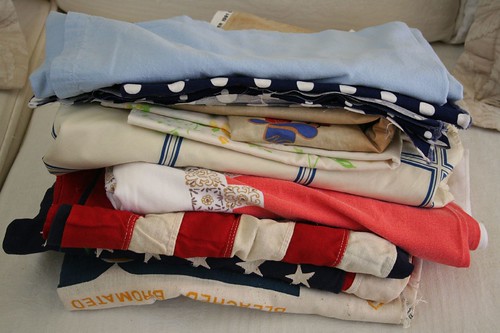 A stack of vintage linens found at a Boy Scout garage sale this weekend, including those flags I turned into bags.

This is where everything comes full circle. So, how can craftiness improve the public’s health? Well, a bit of creativity always helps when trying to use, eat, drive and waste less. Crafty — in a Beastie Boy use of the word — is a compliment to all folk who use their creativity for the betterment of humanity, not just to fulfill their own desires. They thrift to find materials instead of heading off to yet another big box store. They spend the extra 20 minutes waiting around the bus stop to use public transportation in lieu of driving their own car. They move closer to work to minimize the commute. They bring cloth bags to the market. They wear hand-me-down clothing with pride. 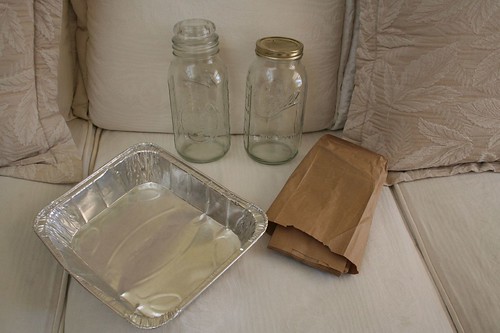 These could have easily been thrown away, but thankfully they were at the sale. I used the disposible casserole to deliver that chicken pot pie. The jars I filled with sun tea and lemons and delivered to friends. The paper bags I’ll use for wrapping during the next year.

If we in the “developed” world use, eat, drive and waste less by instead looking at what we have and really need, we’ll improve our community’s health locally, nationally and globably. We’ll let less go into landfills. We’ll become less of a disposible culture. We’ll respect well-made products instead of cheap consumables. We’ll have cleaner air and rely less on oil from any country. We’ll eat until we’re statisfied instead of until we’re stuffed, know that taking food home in a doggie bag means spending less on food (and a bigger belt) tomorrow. We’ll have more money for organizations that matter to us. We’ll live simply so others can simply live. 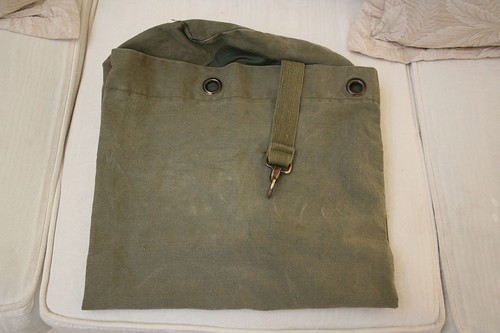 An Army bag that I’m going to use this summer, when — fingers crossed — I’ll be traveling through Africa. A new trip is brewing… All these items cost $4. I gave them $7 because that’s what I had in my wallet. I would have spent that on the jars and dish alone at the market!

Imagine if the United States was once again known for our philanthropy, geneorosity and creativity? That’s that land (and people) I love.