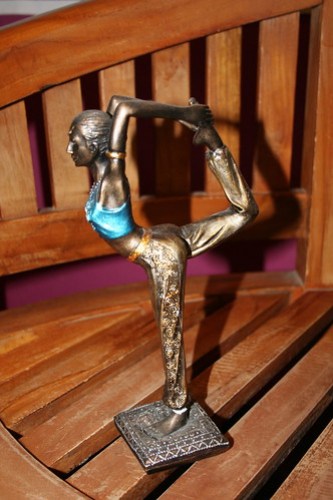 I’ve been in a hot yoga phase lately. There is a great studio in my new neighborhood with classes at the right time for the right price. The people who attend, for the most part, are just there to work out their own mental junk.

This isn’t the studio that looks like an Athleta catalog. There are women and men of just about every size and shape, and when the room hits 104, we are all sweating and huffing in just about the exact same way.

I try to get on the mat 4-5 times per week. I could write extensively about how good hot yoga is for my head — my attitude, self-esteem and general happiness. I like seeing triceps forming and the sheer amount of water I have to drink to keep up before and after a class.

Last week, I was running into class to beat the bell. I usually get there a few minutes early for time to adjust to the heat of the room. But as it happens, time got away from me and I was lucky to make it in the studio before the door was locked. I raced into the room to find one space open and left in the upper right corner of the room. Mercifully, I spread out my mat and got into child pose as the class began, feeling my hip flexors ache and moan with the stretch.

It wasn’t until pose three or so that I noted the woman next to me. More specifically, I wondered why she was out of synch with the class. This studio has several classes, but the most popular are a 60 or 80 minute version of Sutra yoga. That means that every class will have the same series of poses. It is yoga etiquette to listen to the teacher’s cues as you transition from pose to pose. (I find this helpful because my challenge with vinyasa yoga is keeping my breath in the appropriate rhythm. If you listen to the teacher, you’ll hear when you are supposed to be breathing in versus exhaling for your life.)

The woman next to me was already in the next pose when we were still in downward dog. Then, she rushed through the next pose to do stairclimbers… while we were in downward dog. It didn’t take long to realize why the spot next to her was open. This was particularly rude behavior considering everyone faces a giant mirror and we cue our movements from each other. Imagine trying to get into dancer when the person next to you is doing this.  She was trying to show off to 40 people who had intentionally entered a dark, hot room in stretchy clothing — quite possibly the most vulnerable exercise environment behind a Brazilian beach. It made me angry in a flash. There was a back row of new yogis, the resolution crowd. The studio has lots of these folks this time of year and anyone with compassion realizes how recently you were the new person in the back row, praying for a water break. I wanted to reach over and grab the woman next to me mid-nonsense and scream, “KNOCK IT OFF, JERK.”

So, pretty much the exact opposite of what yoga is about.

It was a long 80 minutes of trying to focus on my balance and ability to listen to the teacher through the circus next to me. At some point, likely in a state of dehydration, I realized how this class was a metaphor for life. There is always going to be the attention seeking person who wants to disrupt your flow, those who go against the grain because they find others’ discomfort entertaining. I dislike these people, but not enough to ruin my day — or coveted weekend yoga class. Instead, I kept repeating to myself: IGNORE.

I got out of the class without saying anything, but I did realize a few days later why that spot was once again open. Instead, I started a middle (third) row and made sure she was out of my sight.