My maternal grandmother, Grandma J, grew up in England and immigrated to the United States at the wise age of 22. Recently wed to an American serviceman, she had a baby on each hip and enough sense to get out of the marriage as soon as possible.
She is tough as nails and as sweet as a scone. When she loves you, she’d give you the world. When she’s angry, she makes those crazy footballers gone mad after a bad game look like whiny children.
I’ve been wise to stay on my Grandma J’s good side.
When she immigrated, there were few things she could bring, although a crochet hook, some knitting needles and a beautiful crockery bowl made the cut. My mom has the bowl, I’ve got the needles, and my grandma is still hesitant to give up the hook. Fair enough.
A few months back, Grandma J called me to see if I’d be interested in her knitting supplies. Her eyesight isn’t what it used to be and the boxes of yarn and needles were taking up space. (I’ve noticed my grandparents are regularly sorting their belongings and giving things away. It makes me sad and grateful. Dealing with their deaths one day will be sorrowful enough, without having to hold a yard sale on top of it.)
I jumped at the chance to have her things, especially the ancient knitting books that she worked from when pregnant. The pages are dog-eared and have notes scribbled in the margins. The cursive words are usually names — ones she was considering naming her growing brood. Karel, my mom, and Calvin, my uncle, appear as possibilities on several pages.
In addition to several boxes of yarn, enough knitting needles to last me a lifetime, and the books, she gave me a bag with a sweater inside. She’d started the sweater in 1986. 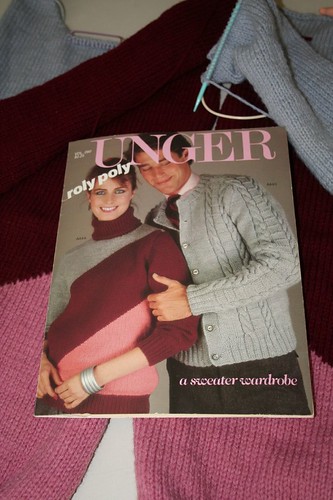 I’m pretty sure it was fugly even then. 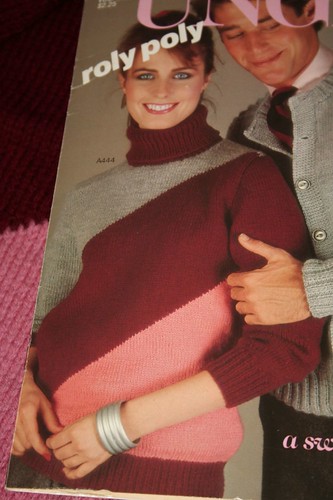 And it isn’t getting any prettier. 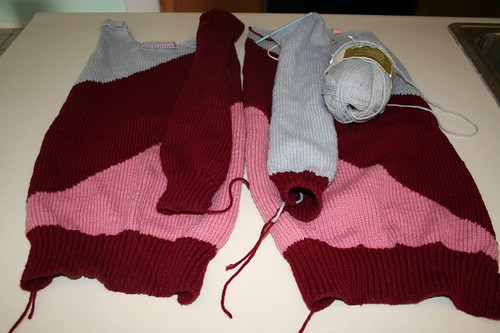 Regardless, she didn’t ask me to finish it for her, but there was a not-so-subtle unspoken nudge to do so. She had this thing almost done — with only the gray sleeve left unfinished. I’ve completed the sleeve and now need to attach the pieces and complete the turtle neck. I look forward to wrapping this thing up in a pretty box and delivering it to her soon — because nothing says Arizona summer like a 3/4 sleeve acrylic Roly Poly Turtleneck.

~
My paternal grandmother, Grandma Max, lives in Tucson. I see her often and while she isn’t crafty, she is known for her green thumbs. Even in the harsh Tucson desert soil, she’s created a lush garden. I asked her this weekend how she learned how to garden with such patience and she reminded me that kids who grew up on farms during the depression often had nothing to their names but patience. Flowers, in comparison to crops, were easy to sow. I gulped back my naivet√©.
On Sunday she carefully went out to her garden and clipped several large leaves from a garden begonia. She has this plant growing in two places — one in full sunlight, where its leaves are fiery red, and one in the shade, where its leaves are emerald green. It is a pretty plant, but I can’t say I’ve ever paid much attention to it. 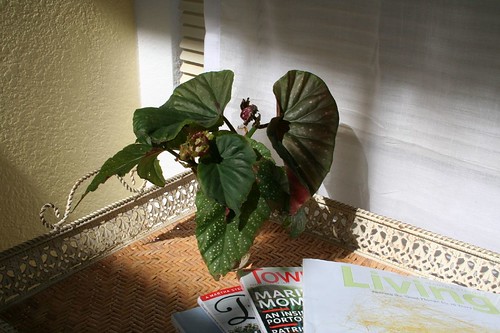 Until Sunday. She handed me a jam jar full of cuttings and told me that now this plant was mine too. Her father gave her mother this garden begonia in 1928. It survived the depression on a Pennsylvania farm, and countless moves there after. My grandmother has lived in Texas, Arizona, Nevada and New Mexico. This begonia has gone with her at every turn.
Now it is my turn. 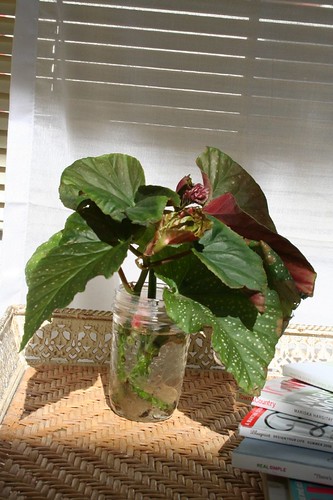 59 Replies to “The Grandmother Chronicles”