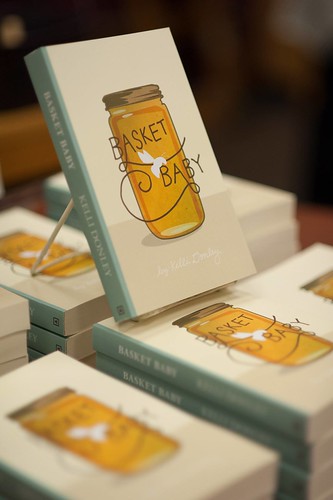 Hi, all! The book signing this weekend went marvelously. It was, much like the wedding, full of unnecessary nervousness and over far too quickly. My face was hot for the reading, I was so flustered—which was silly because the room was full of people I know and love. This burgeoning writing career is a dream come true, and there is little that feels better than to know your tribe will come out and support your wild endeavors.

For those interested, there are signed copies still available at Changing Hands in Tempe, and there are copies also available online. (If you’ve read Basket Baby and wouldn’t mind providing a review, I’d appreciate it.) I’m offering to attend book clubs in person locally, and via Skype elsewhere. If you have a group interested, let’s email.

Now, on to the next book. I’m writing Counting Coup and am well into the final chapters. This is both exciting and unnerving because there are major plot holes and character issues I have to resolve with the next pass. This is when in the writing process, it is much easier to stuff the project in the back of a drawer (or a folder hidden within another folder on your hard drive.) It is like building a house and recognizing you have to add another room, and change where the fireplace is located. And maybe you need another bathroom? But first, you have to finish the drywall and the tiling. You’ll go back and knock down that part of the house later.

It is tempting to pull out the wrecking ball now, is what I’m trying to say. (That and I’m likely watching too much HGTV.) Editing now would be a very bad idea. When I have the end in sight, I have learned in the last ten-plus years of writing that it is critical to push on. The first draft is always bad. Always. Whether you are Tolstoy or Donley, you’re going to have to make some major revisions. But by not first writing the ending, you’re still in first draft limbo. And this gray area, for me, is a swamp of self-doubt and loathing. It is a murky land full of mean girl voices whispering how I’m never going to be a great writer and I don’t deserve to tell this story.

Those mean girls are bitches and deserve to stay in their swamp. This time, I’m not falling off the thin bridge I’ve built over their noise. I know at next pass, and the next, and quite likely the next, and then the final, that bridge will become more solid. And the negativity will go dormant until arriving here when telling the next story. I am not going to get caught walking in circles, writing and editing until I’m so frustrated I put it down, or worse—quit.

So, buckle up. We’re headed toward that tiny light on the horizon.

3 Replies to “Writing in a Cul-de-sac”